For most up to date information, please wisit our  website: https://www.volflab.com/

Our laboratory has a broad conceptual focus on trying to understand how extant diversity has been driven through ecological interactions over evolutionary time. We mostly work on model systems comprising tropical plants and their associated insects (herbivores, pollinators and parasitoids), as the majority of described of terrestrial species fall into this group. Our work often includes the use of molecular tools to provide an evolutionary baseline onto which we add layers of complexity in the form of detailed ecological measurements (e.g. plant chemistry data relevant to herbivores or pollinators). We rely on the field collection of samples and work collaboratively with others to achieve our goals, performing a large component of the molecular work in the Department of Ecology. We are currently working on four main themes: 1) evolution of anti-herbivore defences in plants 2) roles of biotic and abiotic factors in the genesis of host-plant chemical diversity 3) elucidating the role of evolutionary relationships and defensive traits in structuring the insect herbivore communities associated with Salix and Ficus, 4) multi-trophic interactions promoting the diversity of arboreal arthropods.

Why is there such high diversity of chemical defences? The role of insect herbivory in promoting chemical diversity in willows

Chemical diversity of plant defences is a major driver of insect-plant interactions. Answering the question “Why is there such high diversity of chemical defences?” is thus crucial for understanding key ecological processes that shape composition and diversity of insect-plant assemblages. Our aim is to unravel the mechanisms by which chemical diversity evolves. To achieve this, we use ecologically dominant and diverse willows as a model genus. We contrast chemical defences and herbivore communities of allopatric and sympatric willow species. This will help us to show how the exposure to local pools of herbivores promotes the diversity of willow defences and leads to their divergent evolution (Figure 1). Furthermore, we use greenhouse experiments to dissect how the overall diversity of chemical defences arises from individual insect-plant interactions and their specificity. Only such an integrative approach using field surveys, manipulative experiments, and cutting-edge analytical methods can demonstrate how the diversity of defensive secondary metabolites is generated.

We combine field sampling with manipulative greenhouse experiments to achieve our goals. 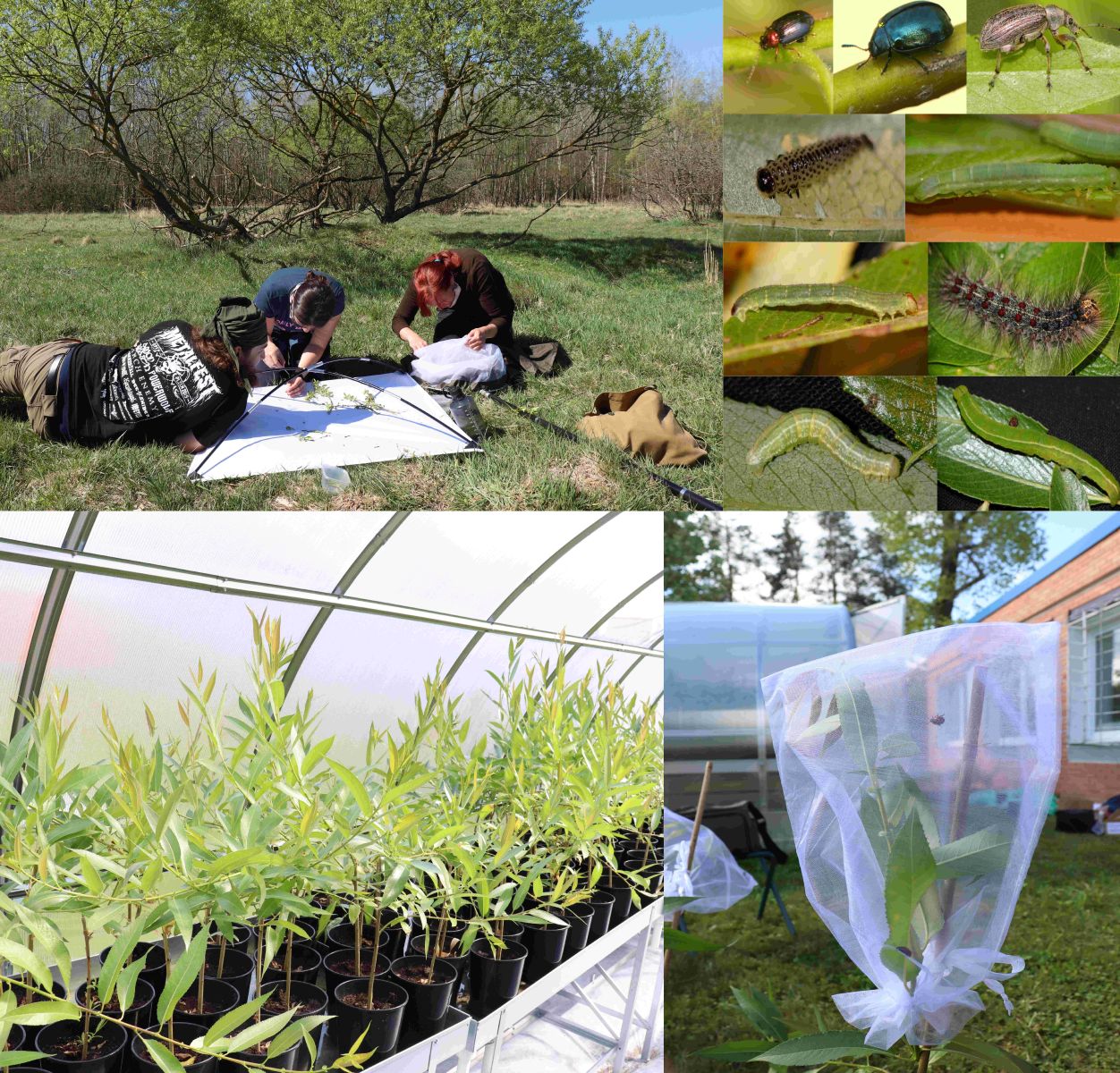 Plants employ a bewildering diversity of defences to withstand herbivory pressure and detrimental environmental conditions. Exploring the factors that drive the variability in plant defensive strategies is crucial for understanding plant evolution in face of herbivory and harsh environment. Within this project we aim at addressing the question: How the interplay between herbivory and environmental pressures form the evolution of plant chemical defences? To achieve this, we combine state of the art metabolomics and bioinformatics combined with field sampling of highland and lowland species of willows. The core of the project includes analysing macroevolutionary patterns in willow defences and comparing them between highland and lowland species. This project will show that changes along elevational gradients strongly affect the way how host-plant defences evolve, directing the prevalent macroevolutionary trends among related willow species (Figure 2).

Plants possess complex suites of evolved defensive traits which serve to determine their palatability for insect herbivores (Fig. 3), and in turn the specificity of insects feeding on them. From the evolutionary perspective, the need to avoid sharing specialized herbivores should promote divergence in defensive strategies among closely related hosts, such as the investment into constitutive vs. induced defenses. This may increase the potential for an insect specificity and performance gradient across congeneric hosts, potentially affecting negative density dependence effects among closely related plants. Within this collaborative project, we take two complementary approaches to manipulate the chemical landscape faced by insect herbivores. Our first objective is to examine whether highly specific induced defenses promote evolutionary divergence in defensive strategies in large tree genera (Ficus, Syzygium, and Macaranga), and hence lower negative density dependence effects in the spatial distribution of species with divergent defenses. Our second objective is to relocate the insects themselves across increasing phylogenetic and chemical distances from their primary hosts.

Fig. 3. A. Variation in caterpillar communities explained Ficus, Macaranga, and Syzygium polyphenol profiles, B: Food-web between focal plants and caterpillars.