We study the structure and function of nuclear genomes in insects and other arthropods, focusing on the key questions of the biology of sex chromosomes, their evolution, and their role in sex determination and speciation. For chromosome research, we use advanced methods of molecular cytogenetics along with standard cytogenetic techniques. The methods include various modification of fluorescence in situ hybridization (FISH), such as FISH with telomeric and rDNA probes, genomic in situ hybridization (GISH), comparative genomic hybridization (CGH), gene mapping using bacterial artificial chromosome (BAC) probes (the so-called BAC-FISH), and chromosome painting with chromosome-specific probes prepared by laser microdissection. We also use methods of molecular genetics and genomics, including next-generation sequencing, to study the content of sex chromosomes, sex-linked genes and repetitive DNA sequences, and genes involved in sex determination.

Chromosomal and molecular mechanisms of sex determination in Lepidoptera 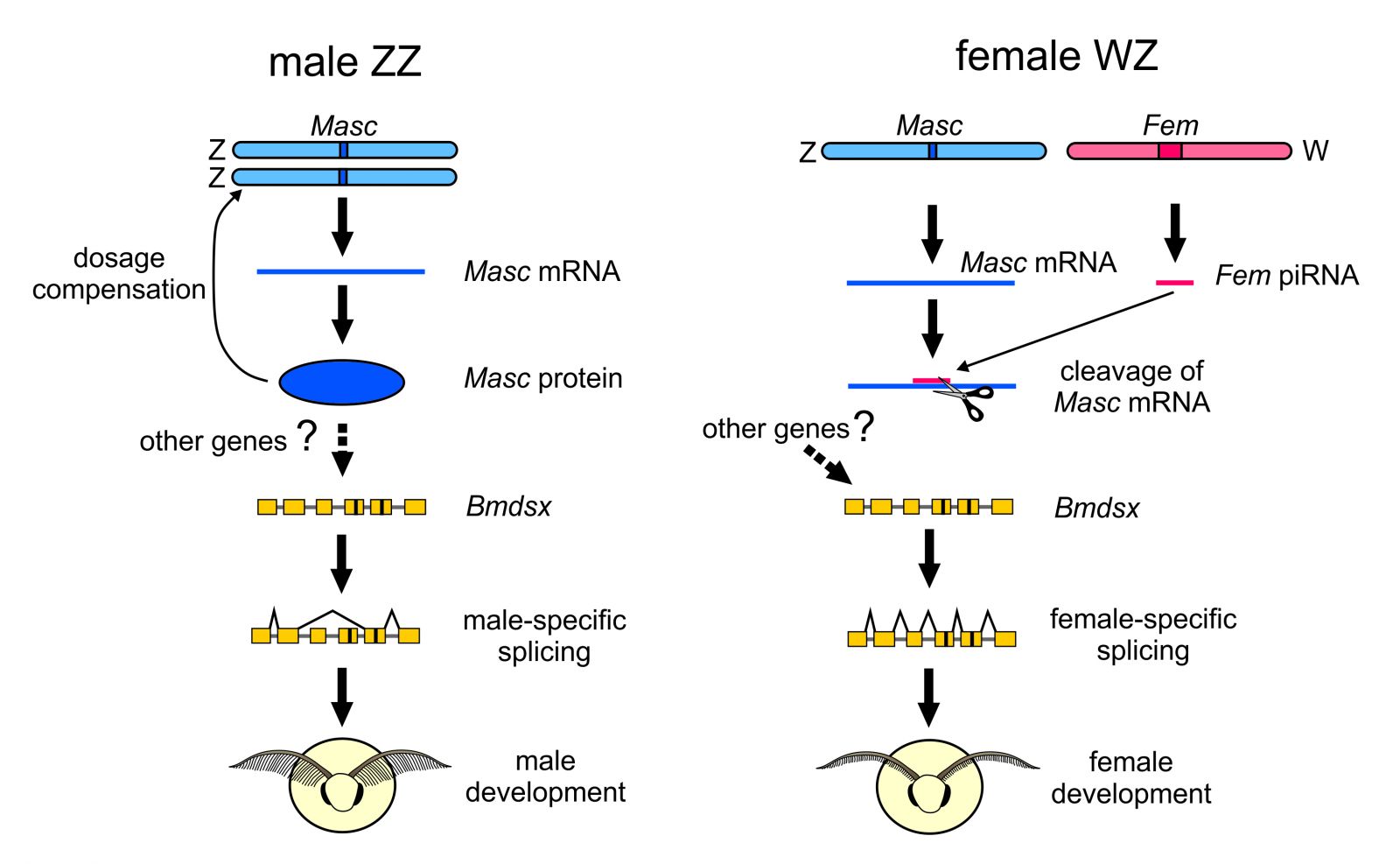 Moths and butterflies (Lepidoptera) have sex chromosome systems with female heterogamety (WZ/ZZ, Z/ZZ), but the actual mechanism of sex determination is largely unknown. Only recently the primary sex-determining factor was discovered in the silkworm, Bombyx mori. Its W chromosome encodes the Fem piRNA, which promotes femaleness by downregulation of the expression of a Z-linked gene, Masculinizer, promoting male development in the W absence. However, results in wild silkmoths Samia cynthia spp. question the W role in determining female sex and support a Z-counting mechanism. On the contrary, our recent results suggest that the Fem piRNA/Masc pathway might be conserved in pyralid moths. Therefore, we study molecular mechanisms of sex determination in species with a stable WZ/ZZ system and those with dispensable or absent W. We identify orthologs of sex determining genes and analyse their expression and function using transcriptome sequences and available methods of molecular genetics. Our aim is to contribute to the understanding of the evolution of sex determination in Lepidoptera.

Molecular differentiation and evolutionary history of sex chromosomes in Lepidoptera

Sex chromosomes and their differentiation belong to most interesting questions of evolutionary genetics. In animals, overwhelming majority of data on the sex chromosome evolution were obtained in organisms with male heterogamety (i.e. with XY sex chromos

ome systems) such as flies and mammals. Much less is known about organisms with female heterogamety, possessing a WZ sex chromosome system or its variations. This particularly regards moths and butterflies (Lepidoptera), the largest animal group with female heterogamety. In selected models we study physical features of lepidopteran genomes, perform synteny mapping of conserved genes, and examine molecular differentiation of sex chromosomes with the aim to uncover evolutionary history of lepidopteran karyotypes and contribute to understanding general mechanisms of sex chromosome evolution.

During the last 25 years, the Sterile Insect Technique (SIT) has been successfully implemented against several major lepidopteran pests. Programmes using SIT to control populations of these pests rely on bisexual releases. Male-only releases could significantly reduce costs and increase efficiency of SIT. However, a convenient genetic sexing system to produce male-only progeny is not yet available in any pest Lepidoptera. We are

developing generic strategies for the construction of genetic sexing strains in Lepidoptera in two ways: (1) by inserting a conditional lethal gene into the female-specific W sex chromosome using genome editing to abort the development of female embryos, and (2) by identification of genes involved in sex determination with the aim to find new possibilities for genetic sexing. As the main model species, we use the codling moth, Cydia pomonella, which is a key pest of pome fruit and walnut orchards in the temperate regions of the world. This research is part of an international project co-ordinated by IAEA (Vienna, Austria).

Repetitive DNA is an inherent component of eukaryotic genomes. Tandem repeats are known to play a crucial role in maintaining chromosome integrity and function, as they occur in centromeres and telomeres. They are also the most rapidly evolving sequences in genomes. Mobile elements, the selfish DNA, shape the genome via multiple mechanisms which lead e.g. to change of gene transcription pattern or generation of structural chromosome aberrations. They often occur in compact genomic regions, i.e. heterochromatin. In moths and butterflies, usually, the only large heterochromatin block is the W chromosome, a sex chromosome unique to females, which is known to be gene-poor and rich in repeats. In this project, we study repetitive sequences that contribute to the W chromosome degeneration in representatives of various families, such as Pieridae, Geometridae, and Noctuidae, with the aim to detect possible inter- and intraspecific variability in both location and abundance of individual repeats on W and elsewhere in the genome and eventually identify mechanisms resulting in the diversification of the W and Z chromosomes. For this purpose, we carry out a comparative analysis of male and female genomes using bioinformatic tools such as RepeatExplorer and Tandem Repeats Finder. Selected repeats are then mapped by fluorescence in situ hybridization (FISH) to show their exact location on the chromosomes.

Figure: Analysis of repetitive DNA in Lepidoptera. a) Comparative genomic hybridization identifies W chromosome in Tischeria ekebladella (Tischeriidae). b) FISH mapping of a microsatellite in Lomaspilis marginata (Geometridae) by FISH. c) FISH mapping of a W-enriched satellite sequence in Pieris napi (Pieridae). d) Variability of presence and content of heterochromatin blocks in L. marginata revealed by FISH and DAPI staining. In b, c, and d, chromosomes are counterstained with DAPI (blue), hybridization signals of the probes are red. Bar = 10 um