Our laboratory uniquely combines several model organisms, namely the fly Drosophila melanogaster, the beetle Tribolium castaneum and the worm Caenorhabditis elegans, with molecular techniques in cultured cells and in vitro. We utilize the power of reverse genetic approaches (transgenesis, mutagenesis, RNAi), in these invertebrate models to address basic biological questionsin the context of intact, developing organisms. The biological processes of our interest include: 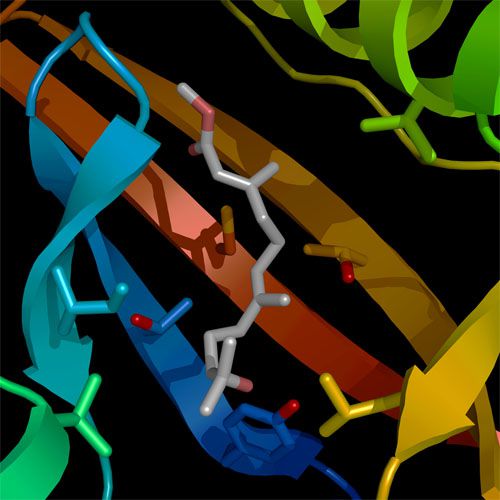 Juvenile hormone (JH) is a terpenoid, a small lipophilic molecule of vital importance to insect development and reproduction. JH was so named for its capacity to block metamorphosis of larvae to adults: only when larvae attain an appropriate stage, a halt o fJH secretion permits metamorphosis. Larvae treated with JH fail to mature, and therefore compounds with JH activity serve as efficient insecticides. The molecular action of JH has for long decades remained an enigma, because a JH receptor could not be identified. In 1986, T.G. Wilson isolated a Drosophila mutant, named Methoprene-tolerant (Met) based on resistance to the JH-mimicking insecticide. The Met gene encodes a transcription factor of the bHLH-PAS family, which includes a receptor of the xenobiotic dioxin but no receptors of known hormones. Breakthrough data from our laboratory in 2007 showed that Met is required for JH to inhibit metamorphosis in the beetleTribolium: like depletion of JH itself, loss of Met caused precocious metamorphosis of the beetle larvae. Our current paper, published by PNAS, has finally brought conclusive evidence for the JH receptor role of Met. Based on structural modeling of the JH-binding domain of Met, we prepared a set of point mutations aiming to displace JH from the ligand-binding pocket. By testing these mutant proteins in vitro, we determined specific amino acids contributing to the high-affinity JH binding. Using mutants unable to bind JH, we demonstrated that recently observed interactions of Met with partner proteins require the specific ligand-binding capacity of Met. Therefore, Met resembles certain nuclear receptors, e. g., of retinoic acid or thyroid hormone, but since Met belongs to a different protein family, it establishes a prototype of a hormonal receptor of a novel class. Our results address a long-standing question of the mechanism of action of juvenile hormone and its insecticidal analogs. 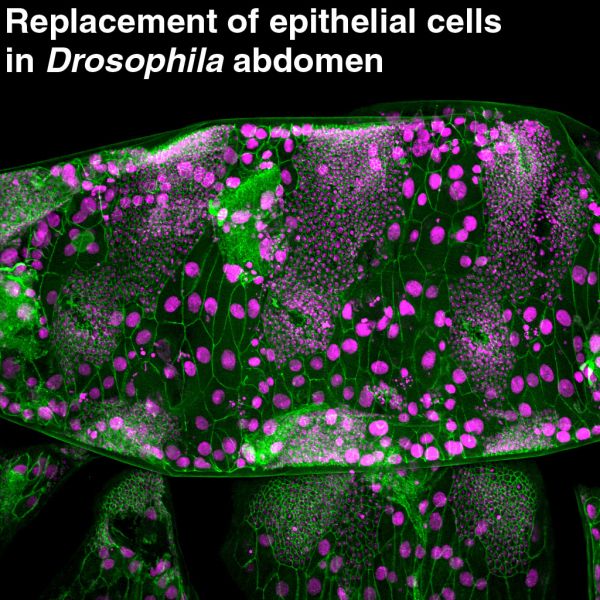 Movements, fusions and closures of epithelial tissues are important for animal development, e.g. during embryogenesis but also for healing of wounds. The fruit fly, Drosophila melanogaster, offers several model examples of such epithelial movements and fusions. An interesting case is the formation of the adult fly abdomen. During metamorphosis of a maggot into fly, large larval epidermal cells (LEC) must leave the epithelium to free space for new cells (histoblasts), which rapidly proliferate and migrate to occupy the entire surface of the abdomen, then produce the adult cuticle. Regulation of this complex exchange of cell populations is unclear. It has been known that the entire process, like metamorphosis of other tissues, is stimulated by the steroid hormone ecdysone, and that the extrusion of LEC requires cytoskeleton changes dependent on the Rho signaling pathway. Unexpectedly we have implicated in the abdominal morphogenesis Atf3, a transcription factor of the bZIP family. Activity of the atf3 gene must be restricted during the exchange of the two cell populations, as deregulated atf3 blocks removal of LEC from the epithelium by interfering with Rho signaling and increasing LEC adhesiveness. These obsolete larval cells consequently obstruct closure of the adult epithelium. To exert this effect, Atf3 requires its binding partner, the oncoprotein Jun. Although interaction between these two regulatory proteins has been well documented by in vitro studies on mammalian cell lines, our results for the first time demonstrate a developmental function of the Atf3-Jun complex in vivo. Metamorphosis of holometabolous insects such as beetles or butterflies is a marked change of form between juvenile and adult stages that enables the larva to efficiently utilize food sources and the flying adult to spread the species. The entry to metamorphosis depends on the morphogenesis-promoting ecdysteroids and the antagonistically acting juvenile hormone (JH), which precludes metamorphosis until a larva attains the appropriate size and developmental stage. JH has been known to prevent metamorphosis since the work of V.B. Wigglesworth for over 70 years. However, the mechanism of JH action has remained an enigma as neither a JH receptor nor its signaling pathway are known. By using the red flour beetle Tribolium castaneum, we showed that a gene Methoprene-tolerant (Met), originally uncovered as a mutation conferring resistance to JH in the fly Drosophila, mediates the anti-metamorphic JH effect. Loss of Met function renders Tribolium insensitive to JH and, unlike in Drosophila, it also causes the beetle larvae to metamorphose precociously. We further showed that in response to JH, Met controls metamorphosis by regulating expression of the Broad-Complex and Krüppel-homolog 1 (Kr-h1) genes, which play critical roles during larva-pupa and pupa-adul metamorphic changes. Our latest studies thus for the first time demonstrate the key role of Met in the regulation of insect metamorphosis by JH and support the disputed function of Met as a receptor or transducer of the JH signal. We have recently shown that this JH signaling pathway is functionally conserved in evolutionarily distant hemimetabolous insects.