The Laboratory of entomopathogenic nematodes  has been part of the Institute of entomology, Biology centre ASCR in České Budějovice since 1985. Entomopathogenic nemtodes (EPNs), that we study, are nematodes belonging to the families Steinernematidae and Heterorhabditidae. EPNs can infect and kill their host within 24 to 48 hours after infection. Then they develop in the body of the dead host and at the end of their lifecycle they produce thousands of new infective juveniles. EPNs are able to infect very wide range of insect host from several orders and occasionally they can infect also other invertebrates. EPNs are present in the most of habitats e.g. fields, orchards, forests, gardens etc. But they are soil organisms, therefore they presence is not so apparent. High efficacy and possibility of mass production in artificial media make EPNs a widely used bioagents in the biological pest control. At present, many EPN-based products are on the market, and in future, further spread of these products can be expected.

Research in our laboratory is targeted in three areas

In our taxonomic studies we mainly focus on the search and descriptions of new EPN species. Description and diagnosis of each new species are based on thorough study of morphology, morphometry and molecular genetics of these nematodes. Up to these days we have discribed 12 species of Steinernematids and Heterorhabditids. Three species were described from the Czech Republic: Steinernema weiseri, S. silvaticum and the last new species described in 2014 is S. poinari. We also test various molecular markers for their utility in taxonomic and phylogenetic studies of the group.

We also focus on ecology of EPNs. Primarily we study 1. influence of insect gradation on incidence of EPNs; 2. competition of indigenous and non-indigenous EPNs, including the role of symbiotic bacteria; 3. orientation and response of EPNs on the signals produced by their hosts; 4. host spectrum, scavenging strategy and incidence of EPN during a year.

Except for these topics above we also study ecology and biology of mollusc-parasitic nematodes (Jiří Nermuť) and viruses of EPNs (Noemi Herrero Asensio).

Since the year 2014 our laboratory expanded. Now we have also genetics section managed by Martina Žurovcová. Evolutionary and population genetics are two basic disciplines, which allow us to study not only the course of evolution at the genetical level, but also can help to solve number of practical problems. Team in our laboratory is interested in the evolution of multigene families, since the question about their origin and following functional diversification is still not completely answered. More specificaly, we study the Idgfs (Imaginal disc growth factors) of Drosophila. Another area of research in our laboratory is the use of genetic markers to resolve taxonomical uncertainites (especially the species identification), of several arthropod groups. We are using mainly PCR amplification and sequencing of the selected genes, but also allozyme analysis. Data are further statistically evaluated with a wide range of standard software such as MEGA, GDA, DNAsp, PAUP, MrBayes and others. Currently, we are also preparing detection of aphid endosymbionts with the use of fluorescent in situ hybridization (FISH).

Entomopathogenic and moluscoparasitic nematodes in the Czech Republic and Florida (USA) 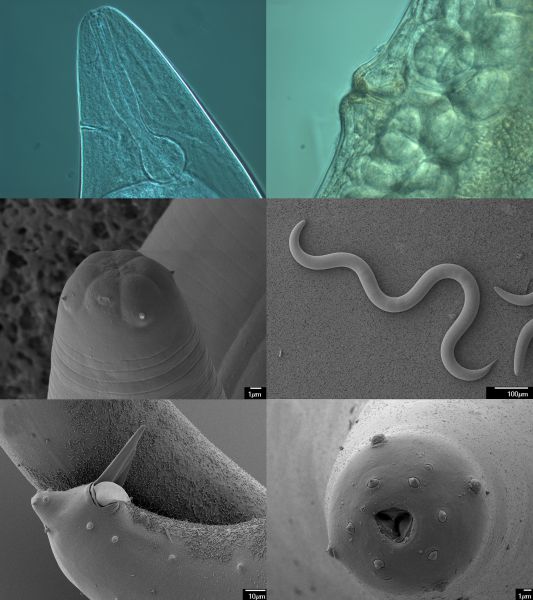 Entomopathogenic nematodes from the families Heterorhabditidae and Steinernematidae are important parasites of insects with a wide host spectrum. Recently, these nematodes were successfully used as biological control agents of noxious insect species in agriculture, forestry etc. Therefore, there is a great scientific interest in understanding the nematode behaviour and natural incidence. However, a lot of newly obtained isolates were identified based only either on mophological characters or DNA analysis and their taxomical position seem to doubtful in some examples. Several species, such as S. feltiae, S. carpocapsae, S. kraussei, S. intermedium/affine group and H. bacteriophora were found almost as the cosmopolitan species (Hominick, 2002). Our proposal combines scientfic knowledge from University of Florida and Biology Centre in České Budějovice to determine EPN species complex occuring in different parts of the world. Our laboratories possess a large and representative EPN collection from different parts of the world to investigate at different levels.Both laboratories are also fully equipped or have an access to a special departments for DNA analysis and scanning and transmition electron microscopy.

Molecular evolution of the Idgf multigene family of Drosophila melanogaster

The main goal of the study is to examine the evolution of different members of Drosophila Imaginal disc growth factor  (Idgf) gene family. This model covers two so far not very well understood phenomena – evolution of loci in multigene families and evolution of genes acting in development. The phylogenetic approach addresses the question about the origin and rate of evolution of Idgf  loci (isolation of the Idgf multigene family from other insect species), while the population genetic approach (the analysis of data collected from individuals from at least two different populations of D. melanogaster) examines the extent of natural selection affecting the individual loci, so that the demographic effects can be clearly distinguished from possible selective forces. Our results suggest that time of duplications corresponds with the time of formation of Drosophilidae family and Idgfs multigene family can not be older than the whole suborder Brachycera (muscoid flies). Significant heterogeneity in the distribution of polymorphism and divergence was found in almost all family members; however tests revealed that only Idgf1 is under balancing selection.

Non-indigenous beneficial nematodes in biocontrol: A threat to indigenous ones? The main goal of this project to evaluate with the use of molecular markers aphid populations after about 15 years after RWA detection in the Czech republic, to compare of the differences of over-all invasive streams and local populations originating in Central Asia and the classification of the interactions of the RWA invader and the new environment (changes in the life-cycle, distribution zonation and host plant spectrum). The research results are useful for plant protection in the CR – because an invasion of D. noxia increases, a zonation and host-specialization changes. Preliminary results from the Mediterrean area show higher number of haplotypes than in the USA, but without clear geographical structure.