Laboratory of Molecular Ecology and Phylogenetics

Our goal is to understand how the tropics became the main reservoir of global insect diversity, by inferring evolutionary and ecological processes that have shaped species diversification and dispersal.

We use efficient genomic tools (target sequence capture, whole-genome re-sequencing) to study macroevolutionary and biogeographical patterns shaped by past abiotic events and biotic interactions. We also aim to understand the evolution of phenotypic diversity using morphological data and a phylogenetic framework. More information at https://pavelmatos.wordpress.com/.

Our current research funded by the Czech Science Foundation (GAČR grant GJ20-18566Y) aims to understand how species interactions (e.g., predation, mutualism) and abiotic factors (e.g., climate, geography) influence the diversification of butterflies at the macroevolutionary (above species) and microevolutionary scales (populations within species).

Biogeography and diversification of Neotropical biodiversity The American tropics, or the Neotropics, is a biogeographic region home of unique animal and plant species. The rich diversity of life, forms, and genes found in this region goes hand in hand with the variety of climate, landscapes, and elevations. A long-standing question, since the time of early naturalists, is still unresolved: is the unique and rich biodiversity of the Neotropics the result of environmental complexity?

We use phylogenomic datasets to infer robust species trees, which are critical to resolve evolutionary relations, estimate divergence times, and study the tempo and mode of species diversification. Furthermore, the phylogenomic trees provide information on how regions become sources or sinks of diversity by means of dispersal. 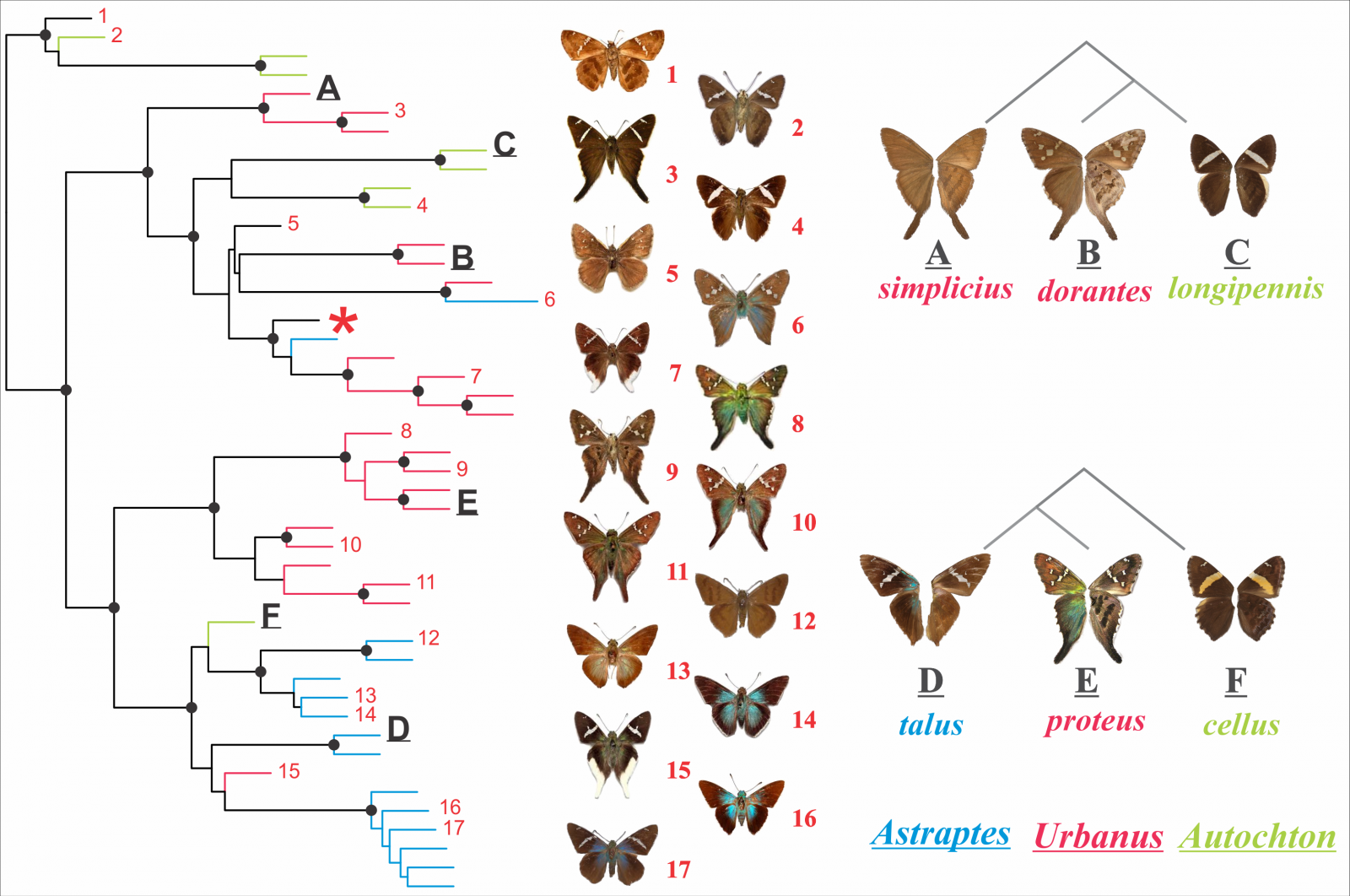 Butterfly wing morphology and colors are under strong selective pressure by mates and natural enemies. Rates of phenotypic evolution can be decoupled from molecular and diversification rates, resulting in distantly related species resembling each other or closely related species having disparate morphologies.

Mimicry in butterflies is a classic example of natural selection, where predators associate an unprofitable prey with warning colorations. The Neotropics harbors several mimicry rings of unrelated butterfly species resembling each other. We study the convergent evolution of skipper butterflies in the subtribe Eudamina (Hesperiidae) by quantifying phenotypic rates (wing shapes and colors) in a phylogenetic framework. Furthermore, we carry out behavioral experiments in the lab to test theoretical predictions of mimicry using models of Neotropical butterflies. Species and their genomes are under constant interaction with the environment. The responses of genomes, at local and regional scales, can be quantified using efficient tools such as high-throughput DNA sequencing. We aim to understand how past changes in the landscape and climates have shaped the diversity and distribution of populations.

We study local adaptation and signatures of selection in the genomes of butterflies. We estimate how the Pleistocene climatic fluctuations have modulated the structure and gene flow of populations across geographic regions. We also study genomic islands of divergence among sympatric species with high morphological resemblance that are either closely related (sister species) or evolutionarily distant.