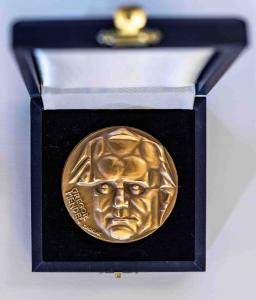 On 14 September 2022, the President of the Czech Academy of Sciences, prof. RNDr. Eva Zažímalová, CSc. awarded the G. J. Mendel Medal of Honour for Merit in the Biological Sciences to our colleague František Marec. Congratulations on receiving this important award!

František Marec is a recognized expert in insect genetics and cytogenetics. In collaboration with foreign colleagues (Walther Traut, Germany; Ken Sahara, Japan), he contributed to the development and application of advanced methods of molecular cytogenetics and fluorescence microscopy for the structural-functional analysis of chromosomes in insects and other arthropods at the turn of the century. These methods, adapted for small organisms, are now used by several laboratories in the Czech Republic and many laboratories in a number of other countries for chromosome research in invertebrates. For most of his scientific career, F. Marec has worked on the sex chromosomes of moths and butterflies (Lepidoptera) and their role in sex determination and speciation. Thanks to his activities and the work of his Molecular Cytogenetics Laboratory, knowledge of the sex chromosomes of moths and butterflies exceeded that of most groups of invertebrates, including model species. In addition, he also contributed significantly to several "textbook" discoveries. For example, he contributed to the discovery of the first fully haploid animal – the mite Brevipalpus phoenicis, whose populations consist of genetic males feminized by the endosymbiotic bacterium Cardinium (Weeks, Marec, Breeuwer 2021, Science 292, 2479–2482). Together with colleagues from the "University of Liverpool" and with his former PhD student Martina Dalíková, he also significantly participated in the discovery of the genetic nature of industrial melanism, i.e. the occurrence of melanic forms of moths as a result of environmental pollution, in the model moth Biston betularia (Van't Hof et al. 2011, Science 332, 958–960). Both discoveries received considerable media attention abroad and the story of industrial melanism also in this country, where it became the subject of a Czech TV documentary entitled "Disguises of Moths".

During the ceremony, F. Marec said in his words of thanks, among other things: "I am pleased to receive the award in the year of the bicentenary of Gregor Mendel's birth. Besides, I myself studied in Brno and I still remember counting peas in the exercises." photo: in the middle prof. František Marec with Dr. Zdeněk Havlas and with prof. Eva Zažímalová (the president of the Czech Academy of Sciences)