Why are forest canopies such a variable and dynamic environment? 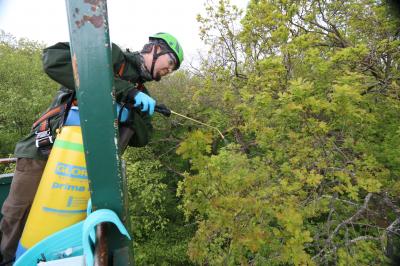 Why are forest canopies such a variable and dynamic environment? If you want to find out, see our new paper that shows how induction in plant defences promotes variation in leaf traits, predation and insect herbivore assemblages in canopy trees.

Figure: Sampling from a canopy crane

Forest canopies are complex and highly diverse environments. Their diversity is affected by pronounced gradients in abiotic and biotic conditions, including variation in leaf chemistry. Variation in tree chemistry can arise from multiple factors, including vertical stratification or induction of leaf defences due to herbivory. In this paper, we explored how the branch-localized defence induction and vertical stratification in mature oaks contribute to chemical variation that extends across trophic levels and tree canopies. We show that vertical stratification affected the levels of functional traits that are involved in protecting leaves in the upper canopy from abiotic stress, such as high UV-irradiation. In contrast, defence induction supported upregulation of several chemical defences that target insect herbivores directly or indirectly by attracting their natural enemies. Despite all the pronounced variation in leaf chemistry, the induction of direct defences did not affect communities of canopy herbivores. These were mainly affected by predation that increased in response to branch-localized induction. The predators could readily remove herbivores from the branches, providing an effective protection for the canopy leaves. In turn, we show that there are multiple factors contributing to variation across canopies. Branch-localized induction and predation may be the ones with particularly strong effects on diverse assemblages of insects in temperate forests.

Link to a video from the project: https://www.youtube.com/watch?v=dNT_s3Q52Ic&ab_channel=iDiv