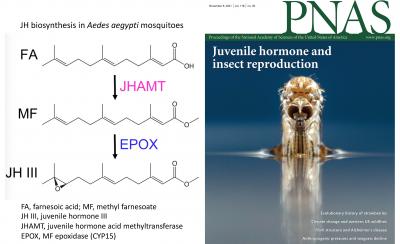 CRISPR/Cas9 knockout mosquitoes lack the enzymes needed to synthesize either juvenile hormone or both juvenile hormone and its non-epoxidated precursor. Reduced fitness of the former reveals the biological significance of the epoxidation step.

Image description: Left: The last two steps of juvenile hormone biosynthesis in Aedes aegypti mosquitoes. Right: A photograph of an emerging adult mosquito was chosen for the cover of PNAS that features the corresponding article by Marcela Nouzova and colleagues. Image credit: Alex Wild.

Juvenile hormone (JH) controls metamorphosis and stimulates reproduction in insects. In the "yellow fever mosquito" Aedes aegypti, JH biosynthesis culminates by two chemical reactions: (1) methylation of farnesoic acid to methyl farnesoate (MF), and (2) epoxidation of MF to JH III. The precursor MF has a hormonal function in crustaceans and, relative to the epoxidated JH III of insects, is a less potent agonist of JH receptors (Bittova et al., 2019). The order of the two biosynthetic reactions in the mosquito together with CRISPR/Cas9-mediated knockouts of the responsible enzymes enabled us to genetically separate the production of epoxidated JH III from synthesis of MF. Mosquito offspring that lacked the ability to synthesize both MF and JH III completed embryogenesis and all larval stages but died at the onset of metamorphosis, whereas mosquitoes lacking JH III, but making MF, reached adulthood and reproduced. However, both males and females deficient for the epoxidated hormone were smaller and reproductively inferior to wild-type mosquitoes. These results suggest that the capacity to epoxidate MF, which is absent in crustaceans, was an innovation contributing to the evolutionary success of insects.