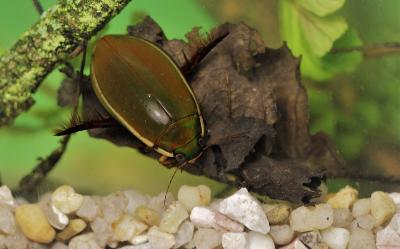 A new study published in the Journal of Applied Ecology synthesises all available datasets on diversity of freshwater habitats at Central European spoil heaps, including newly sampled communities of aquatic beetles and hemipterans from the North Bohemian lignite basin.

Freshwater ecosystems face an unprecedented anthropogenic pressure. Fortunately, many freshwater species found unexpected refuges in some artificial habitats, such as in pools or drainage ditches at spoil heaps after coal mining. These habitats have been mostly created during technical reclamation, only a small part has been established spontaneously by natural processes. To make sure the restored habitats efficiently serve as secondary refuges to threatened species, detailed studies of individual restoration tools are necessary. However, data are highly limited, especially because of a lack of any syntheses.

The study led by Vojtěch Kolář, Filip Tichánek and Robert Tropek showed preferences of aquatic beetles and hemipterans to spontaneously and semi-spontaneously developed pools. However, the synthesis of available datasets revealed that some environmental features of the freshwater habitats are more important for their biodiversity than their origin. Especially because individual groups of organisms prefer pools and ditches of different origin. To efficiently support the freshwater biodiversity, the restored freshwater habitats should be fishless, smaller, with a heterogeneous bottom substrate, with a diverse and wide littoral vegetation, but with enough area of open water, with gradually sloping banks, and without too many shading trees. If we succeed to restore such freshwater habitats, ideally by ecological restoration tools, we can hope that they at least partially substitute the natural habitats destroyed by mining activities.