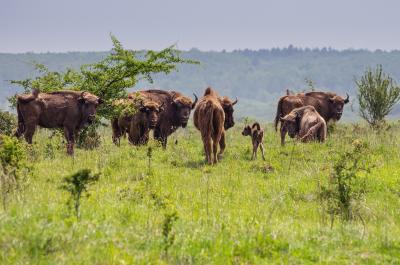 Return of large native herbivores to selected areas is increasingly advocated as a cost-efficient approach to managing natural biotopes that depend on disturbance-succession dynamics and are imperilled by successional changes. We tested efficiency of this approach for insect conservation by studying butterflies of the former military training range Milovice, Czech Republic, refaunated since 2015 by a combination of Exmoor pony (“wild” horse), Tauros cattle (“aurochs”), and wisent.

The current insect biodiversity has evolved prior to the rise of humans with their technologies, in a World dominated by large mammalian herbivores. Since extermination or drastic reduction of mammalian megafauna in the late Pleistocene/early Holocene, European ecosystems are functionally incomplete, missing crucial ecological processes once maintaining the fine-scale disturbance-succession dynamics. For a time, the effects of vanished large mammals were replaced by traditional agriculture and forestry, which was propelled by domesticated forms of many of the animals whose wild forms had humans decimated (cattle, horse). With the advent modern epoch, land forms hosting high insect diversity remained preserved only in areas with special regimes, including military training ranges.

We compared butterfly faunas immediately after the military use termination (early 1990s), prior to the refaunation (2009), and after it (2016–19); and monitored butterflies at refaunated and neglected plots. We related the composition of butterfly communities to the life history and climatic traits of the constituent species.

Whereas the changes in species composition following the cessation of military use can be explained by successional degradation of grassland habitats, year-round natural grazing of large herbivores reverses the successional development and supports butterflies depending on competitively poor plants, including threatened species. Restoring large ungulates populations represents a great hope for conserving specialised insects, if settings of the projects, and locally adapted ungulate densities, do not deplete resources for species with often contrasting requirements.