Evolution of the fastest jaws in nature 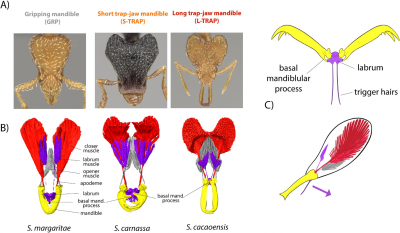 The trap-jaw ants are famous for having one of the natural world’s fastest movements, but the evolution of the mechanism allowing their jaw movement has been little known. In a comprehensive study published in Plos Biology, researchers led by D. Booher (USA) and E. Economo (Japan) in collaboration with Milan Janda from our institute, revealed that the mechanism itself arose multiple times before a spectacular diversification of mandible shape.

Figure: Mandible diversity and trap-mechanism of Strumigenys ants. Strumigenys is a pantropical, hyperdiverse genus of leaf litter predators. (A) Many species have normal mandibles which they use to grip and hold their prey. Some species have power-amplified “trap-jaw” mandibles which they use to strike and stun prey, which comes in short-mandibled (S-TRAP) and long-mandibled (L-TRAP) forms. (B) The trap-jaw mechanism involves the modification of the labrum and basal mandibular process into a latch which locks the mandibles in an open position, with labrum muscle triggering release and mandible closure. (C) With trap-jaw mandibles in the locked position, the labrum and basal mandibular processes form a latch mechanism, controlled by rotation of the labrum in the sagittal plane.

We investigated the evolution of a biomechanical innovation, the latch-spring mechanism of trap-jaw ants, to address 2 evolutionary problems: how form and function change in a system during the evolution of new complex traits, and whether such innovations and the diversity they beget are repeatable in time and space.

Using a new phylogenetic reconstruction of 470 species, and X-ray microtomography and high-speed videography of representative taxa, we found the trap-jaw mechanism evolved independently 7 to 10 times in a single ant genus (Strumigenys), resulting in the repeated evolution of diverse forms on different continents. The trap mechanism facilitates a 6 to 7 order of magnitude greater mandible acceleration relative to simpler ancestors, currently the fastest recorded acceleration of a resettable animal movement.

We found that most morphological diversification occurred after evolution of latch-spring mechanisms, which evolved via minor realignments of mouthpart structures. This finding, whereby incremental changes in form lead to a change of function, followed by large morphological reorganization around the new function, provides a model for understanding the evolution of complex biomechanical traits, as well as insights into why the mechanism has evolved so many times independently around the world.