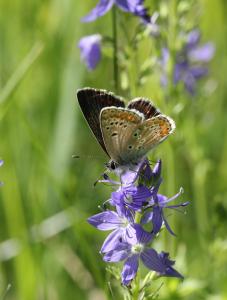 Scientists from the Institute of Entomology examined the infection by intracellular bacterium Wolbachia in Aricia and Pseudophilotes blue butterflies (Lepidoptera: Lycaenidae).

Wolbachia is the most widespread bacterium inhabiting cytoplasm of insects, known to be affecting its host to ensure the spread to the next generation, and also capable of horizontal transfer. Being co-inherited with mitochondria, these bacteria often cause problems in mitochondrial phylogeny inference.

We sampled butterflies Aricia agestis/Aricia artaxerxes and the Pseudophilotes baton species complex across their distribution ranges. We sequenced a butterfly mitochondrial gene and search for Wolbachia infection in the DNA samples by amplifying and sequencing two Wolbachia genes. We discovered that in both butterfly systems, infected and uninfected individuals existed. Aricia artaxerxes, species of mountains and piedmont grasslands, was highly prevalent in Wolbachia, and the butterfly's mitochondrial structure was shallow across its whole Palaearctic range. On the other hand, only few individuals of A. agestis, inhabitant of lowland grasslands of Southern and Central Europe, were infected. Some A. agestis individuals infected by the same bacterial strain as A. artaxerxes were discovered in lowlands of Central Europe, where the two species meet, pointing to a possible horizontal transfer, by, for instance, a shared host plant.

Mitochondrial history of the P. baton spp., a complex of several poorly separated taxa, mirrored its Wolbachia infection and not the taxonomical division. Pseudophilotes baton and P. vicrama, vicariant taxa of Western and Eastern European grasslands, formed a hybrid zone in Europe: we discovered individuals with P. baton mitochondrial sequence and Wolbachia strain, but with the male genital structure of P. vicrama.

Wolbachia may interfere with insect mitochondrial history, but we can use the knowledge on the infection as an additional marker to understand the observed patterns. We encourage testing for Wolbachia to be a routine in studies using mitochondrial DNA.