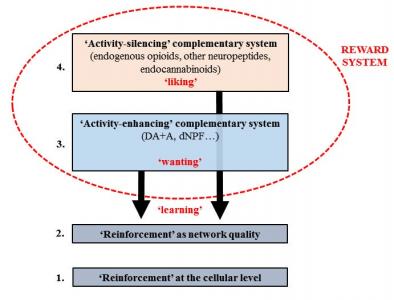 There is no doubt that Drosophila is able to record stressful situations and then respond to them accordingly. But can Drosophila also feel pleasure? The current state of knowledge about this phenomenon is summarized in our review article.

Fig. 1. A hierarchy of basic levels at which the processing of a particular stimulus and the achievement of appropriate response to this stimulus can be reinforced. The arrows indicate the direction of ´learning´ pointing from reward levels back to the network level. ´Learning´ probably does not take place directly in complementary systems, but rather complementary systems influence the learning of networks. Hypothetically, the mechanisms of the reinforcement of stimulus processing and of achieving an appropriate response to this stimulus may occur in parallel in a given part of the network. The network may apply to stimuli that requires processing at different levels. The network can use only one level or all levels concurrently.

Recent insect neurobiological research resulted in a suggestion that insects also have a brain reward system with similar principles of functioning as mammals/humans. The most extensively investigated model of the reward system in insects is the fruit fly Drosophila melanogaster brain with the main associative centre called mushroom bodies. It is accepted that Drosophila can discriminate between rewarding and punishing environmental stimuli and consequently undergo associative learning. Neurochemical systems that mediate the ´wanting´ component of reward in the Drosophila brain are well documented, however, the systems that mediate the pleasure component of reward in mammals, including those involving the endogenous opioid and endocannabinoid systems associated with the hedonic component of reward, are unlikely to be present in insects. We propose in our review a hypothetical hierarchy of the levels of reinforcement processing in response to particular stimuli, and the parallel processes that take place concurrently.