Seasonality in telomerase activity in relation to cell size, DNA replication, and nutrients in the fat body of Apis mellifera 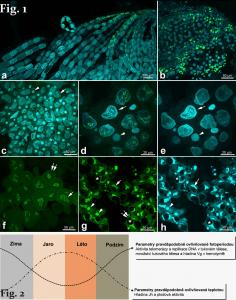 Eusocial insect species, such as bees, ants, or termites, offer excellent systems for aging research, as they exhibit notable lifespan differences among individuals depending on the social organization within the colonies.

Figure 1 S-phase nuclei in fat bodies visualized using EdU. S-phase nuclei were visualized using the thymidine analogue EdU, which is incorporated into newly synthesized DNA and fluorescently labeled with Alexa 488 (green signals). DNA was labeled with DAPI (blue signals). The assay was performed on the ovaries of queens (a), worker’s guts (b), foragers in August (c-e), and workers in December–January (f-h). Arrows, trophocyte nuclei; arrowheads, oenocyte nuclei; double arrows, trophocytes; stars, lipid droplets. Figure. 2. Schematic depiction of seasonal dynamics of physiological or colony factors determining the honeybee lifespan. The parameters such as telomerase activity and DNA replication in the fat body, the fat body mass, and Vg levels at hemolymph are elevated in winter season and declined in summer season presumably in relation to photoperiod changes. Levels of Jh and brooding activity are elevated in summer season and decreased in winter season presumably in relation to external temperature.

In honeybees (Apis mellifera), the rate of aging is modulated through social interactions and according to caste differentiation and the seasonal (winter/summer) generation of workers. Winter generation workers, which hatch at the end of summer, have remarkably extended lifespans as an adaptation to the cold season when the resources required for the growth and reproduction of colonies are limited and the bees need to maintain the colony until the next spring. In contrast, the summer bees only live for several weeks.

To better understand the lifespan differences between summer and winter bees, we studied the fat bodies of honeybee workers and identified several parameters that fluctuate in a season-dependent manner. In agreement with the assumption that winter workers possess greater fat body mass, our data showed gradual increases in fat body mass, the size of the fat body cells, and Vg production as the winter season proceeded, as well as contrasting gradual decreases in these parameters in the summer season. The differences in the fat bodies between winter and summer bees are accompanied by respective increases and decreases in telomerase activity and DNA replication in the fat bodies (Figure 1). These data show that although the fat bodies of winter bees differ significantly from those of summer bees, these differences are not a priori set when bees hatch at the end of summer or in early autumn but instead gradually evolve over the course of the season, depending on environmental factors.

In honeybees, Vg is a life-promoting factor. Previous studies revealed that Vg shows an inhibitory effect on Jh titer, and Jh and Vg titers show opposite patterns. In contrast to Vg, Jh accelerates honeybee aging, and its titers are stimulated by temperature-dependent brooding activity in the colony (Figure 2). Considering all these observations, we suggest a hypothesis that photoperiod shortening stimulates DNA replication in fat body cells, which increases the metabolic activity in the cells and Vg synthesis. Although JH levels are primarily set by temperature-dependent brooding activity, increased levels of Vg decrease JH levels, potentially leading to a prolonged lifespan.