More caterpillars in the temperate forests than in tropical rain forests: Scientists compared the abundance of insects across three continents 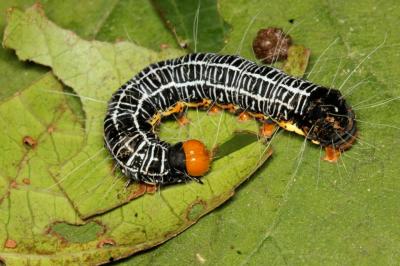 Insect decline is one of the major environmental problems of today and affects the number of individuals in insect communities. But how many insect individuals are there? And does the number of insects in temperate deciduous forests differ from those in tropical rain forests? An international team of scientists led by ecologist Vojtech Novotny from the Biology Centre of the Czech Academy of Sciences set out to answer these basic, albeit still unexplored questions. They have been collecting and evaluating data from forests on three continents for 14 years. The unique results were published in the respected journal Ecology Letters.

“Although we already know something about species diversity, we still know very little about insect abundance. It is extremely difficult to document how many arthropods live in a forest area. At the same time, such a comparison has never been made between the temperate zone and the tropics at the level of entire populations and different groups," says prof. Vojtech Novotny, head of the Ecology Department at the Biology Centre of the Czech Academy of Sciences (CAS) and also the holder of a prestigious European ERC grant, the aim of which is to study complex relationships in forest ecosystems.

Novotny’s team selected nine experimental plots of mature forests, each one-tenth of a hectare in size, including rich floodplain forests in southern Moravia in the Czech Republic (Europe), lowland forests in Virginia (North America), and native tropical forests in Papua New Guinea (Australasia). In these areas, they counted ants, spiders, caterpillars and leaf-mining larvae from all trees with a trunk diameter greater than 5 centimeters. Thus they got information on insect abundance and also their host plants. They also assessed how different insect groups interacted with each other. They standardized the results so that the data could be compared across continents. The work on ants yielded interesting findings. "Simply put, ten times more ants live in tropical forests than in temperate forests. We found that these social insects have, on average, far more nests and bigger in size in tropical trees. Furthermore, tropical ecosystem provides more honeydew for ants”, explains Petr Klimes, head of the Laboratory Ecology of Social Insects at the Biology Centre CAS, one of the authors of the study. "However, we were surprised that in comparison with the tropics, there are more than twice as many caterpillars and other leaf-eating larvae in the temperate zone per hectare of forest, but roughly the same number of spiders," Klimes continues.

The scientists were also surprised by their finding that insect species do not affect each other in terms of abundance. "We tested whether different species of predatory insects compete, or whether there is less prey in trees with a larger number of predatory insects, but none of that was confirmed. Thus, although many more ant individuals live on trees in the tropics than in the Czech Republic, we have not observed that other insects avoid ants in the tropics. It turns out that the size of the tree and temperature have the greatest influence on the number of insects," adds Ondrej Mottl, an ecologist at University of Bergen and the lead author of the study. As a former doctoral student on the project, Ondrej received the Dean's Award of the Faculty of Science at University of South Bohemia for his work on the topic.

Data collection for this research began in 2006 and involved an international team of dozens of scientists, students and native assistants, in collaboration with New Guinea Binatang Research Center and Smithsonian Conservation Biology Institute. For the first time in the history of ecological research, the study captured the state of insect abundance and the ecological relationships in forest ecosystems on a global scale. "Natural forests are being cut down at a tremendous pace, and we still do not know satisfactorily what lives in them and what the connections between animals are, so we tried to map it out" concludes prof. Novotný. 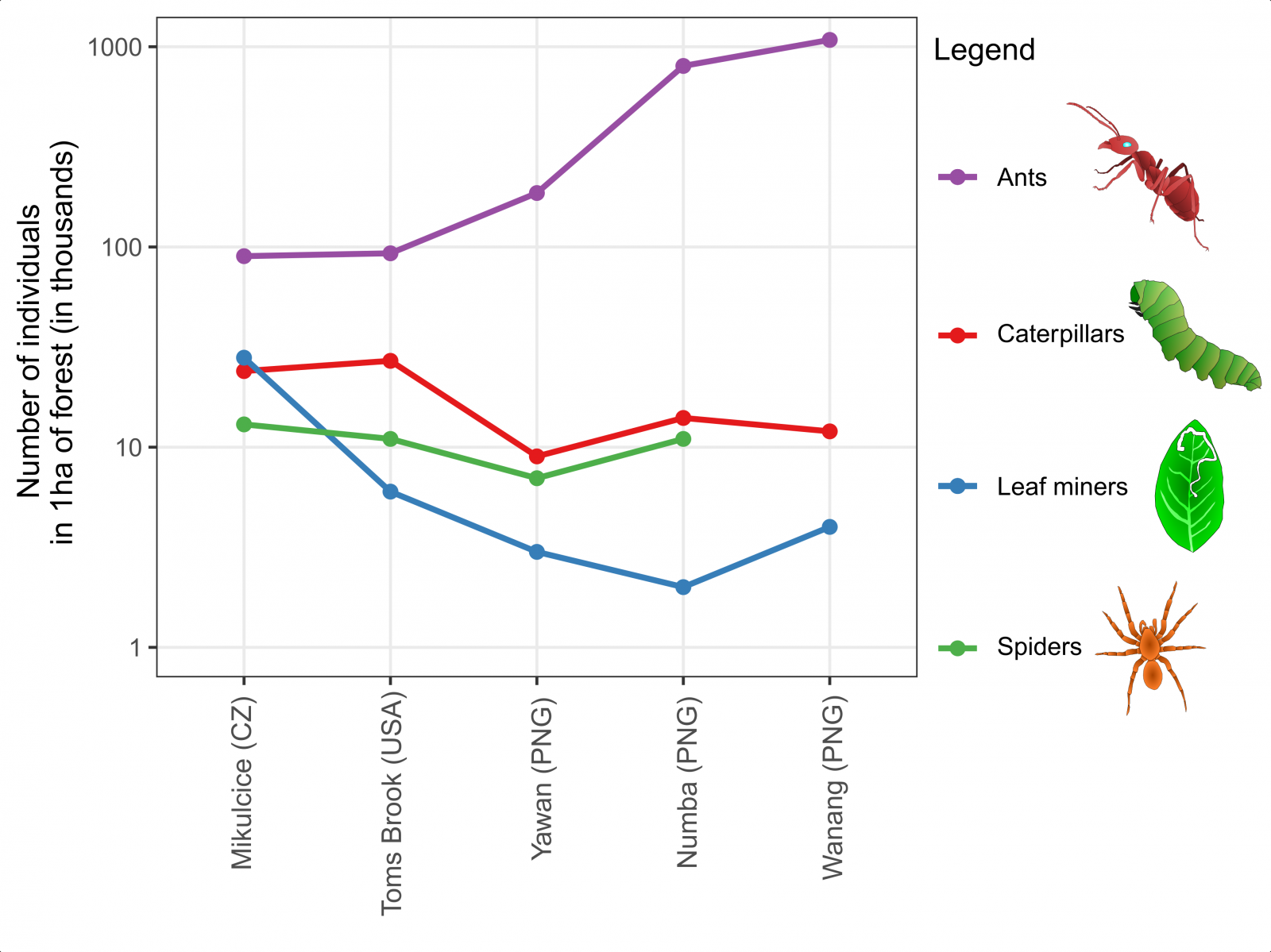 Changes in the abundance of four groups of arthropods in the tree canopies along the temperature gradient from temperate forests to the tropics. As ant abundances rise into the tropics, spiders do not change, and leaf-eating insects (caterpillars and mining larvae) decline. See the table above for average values ​​for each of the three regions studied. Edited by O. Mottl & P. ​​Klimes (data from Mottl et al. 2020, Ecology Letters 23: 1499–1510). Note vertical axis is on logarithmic scale.

• Collected a total of individuals:

Crown of a mature tree in South...

Larva mining inside a leaf in a...

An ant of the genus Diacamma, a...

A spider lurking for a prey,...