We uncovered the origin of Caucasian mayflies 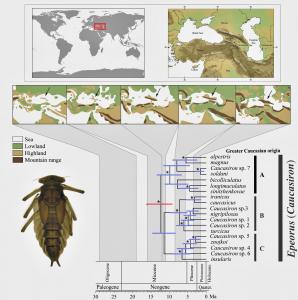 Our new paper, published in Molecular Phylogenetics and Evolution, brings the very first insight into the evolution of aquatic insects in the Caucasus.

Figure description: Localization and geography of the studied region (above) and phylogenetic analysis of mayfly subgenus Caucasiron linked to the geological history of the region.

Mountainous areas represent unique ecosystems, where the endemic species occurring nowhere else can often be found. Specifically, the Caucasus Mountains is one of the most biologically diverse regions worldwide. However, some of the highly diverse groups of organisms, such as aquatic insects, are still only insufficiently known in this area.

We intensively investigate one of such understudied groups, namely Caucasian mayflies (Ephemeroptera) since 2009. During this time, we organized many expeditions to the area and discovered more than 15 new species. Recently, we studied questions concerning the origin and distribution of the unique mayfly diversity in the Caucasus.

Using DNA analysis, we proved that the origin of Caucasian mayflies is closely linked to the geological history of the Caucasus Mountains as such. The mountain ranges, forming at the end of Tertiary, constituted obstacles for the species dispersal. At the same time, they offered new habitats, the situation theoretically favourable for the evolution of new species. We dated the major diversification of mayflies precisely into this period.

Today, most of the species from our study group inhabit so called Greater Caucasus, the most prominent mountain range that originated as an isolated island in the ancient sea. Our results show that its current diversity is a result of both local speciation and later immigration from neighbouring mountain ranges.