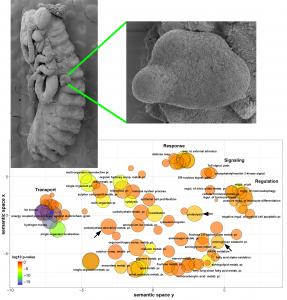 The article in Frontiers in Zoology reports isolation of genes expressed in enigmatic organs of insect embryos called pleuropodia. Our data bring a transcriptomic support for the eighty years-old hypothesis that the pleuropodia secrete enzymes that digest a part of the egg envelopes and thus enable the larva to get out of the egg.

Pleuropodia are peculiar limb-derived organs that transiently appear on the first abdominal segment in embryos of insects from majority of “orders”. Perhaps because they are missing in the genetic model Drosophila, little is known about them. Experiments carried out on orthopteran insects eighty years ago indicated that the pleuropodia secrete a “hatching enzyme” that digests the serosal cuticle, an egg envelope, to enable the larva to hatch. But evidence by state-of-the-art methods is missing. We used high-throughput RNA-sequencing to identify the genes expressed in the pleuropodia of the locust Schistocerca gregaria (Orthoptera). Transcriptomes were isolated from ten developmental stages of pleuropodia that we first defined morphologically using transmission electron microscopy. We show that when the pleuropodia have morphological markers of functional organs and highly produce secretion, they are indeed enriched in transcripts for enzymes capable of digesting cuticular protein and chitin. These include the potent cuticulo-lytic Chitinase 5, whose transcript rises just before hatching. This provides a molecular support for the function of the pleuropodia in secretion of the “hatching enzyme”. Unexpected finding was the enrichment in transcripts for immunity-related enzymes. This indicates that the pleuropodia may also have other functions, such as facilitation of embryonic immune defense. By the genes that they express the pleuropodia are specialized embryonic organs and apparently an important though neglected part of insect physiology.