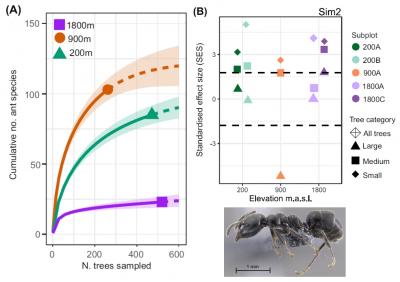 The study in Ecography investigates the effects of elevation on tropical arboreal ant communities for the first time. It reveals a strong mid-elevation peak in ant species diversity in rainforest canopies, mediated by shifts in the interspecies competition and nesting preferences.

Photo description: Ant species richness increases more rapidly with number of sampled trees in mid elevation (900 m) than in lowlands (200 m) and highlands (1800 m) (Fig. A). One of the main factors explaining this paradox is a decreased interspecies competition within large canopy trees at 900 m in Fig. B (the negative SES value in the bottom, while values > 2 indicate an increased competition). Even more than the richness, the species identity changes: there is only one species Anonychomyrma minuta that occurs in all elevations (ant photo).

While the main drivers of elevational change in communities are climatic, local factors such as habitat complexity may interact with climate to influence the diversity and composition of communities. In the tropics, ants span a wide elevational range, and as ectotherms are sensitive to climate, and are also some of the most ecologically important and abundant invertebrates in rainforest canopies. We studied entire ant communities and their nests in 1254 trees within 0.2 ha forest plots at three elevations in Papua New Guinea, and assessed the effects of tree size, nest microhabitat use and interspecies competition.

We found a surprisingly strong mid-elevation peak in arboreal ant diversity and nest abundance, rather than a linear decline with elevation (Fig. A). Our analyses revealed a complexity of drivers that mediate this pattern. Microhabitat use was a strong factor in shaping the ant diversity and abundance, in combination with climate and competition. With increased elevation, there was an increased use of more insulated nest habitats (epiphytes, twigs) and a decreased influence of dominant ant species. Our models based on randomisation of the species co-occurrences in trees indicate that this increased use of cryptic nest sites contributed to differential co-occurrence patterns of the ant species between small and large trees (Fig B).