Phenology responses of temperate butterflies to latitude depend on ecological traits 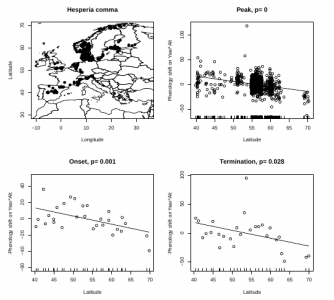 The article in Ecology Letters show the phenology changes of European and American butterflies towards latitude.

Fig.: Silver-spotted skipper, Hesperia comma, a species occurring earlier in the North than in Central Europe.

It is expected that global climate change will impact seasonal occurrence of biological phenomena. Because the current warming can be viewed as redistribution of latitudinal climatic belts, we studied whether flight periods of butterflies change with latitude. We analyzed 105 datasets containing more than 250,000 distribution records of European and North American species. Using this massive data, we document that there is no simple relationship between latitude and the timing of butterfly flight. Majority of species either delay their flight periods towards North, or display no change across latitudes, but a few species display earlier flight periods in high latitudes. The character of responses was linked to the species’ seasonality (flight of early season species was delayed, and flight of summer species advanced at high latitudes) and oceanic vs. continental climatic niches (delays in oceanic, stability in continental species). Future restructuring of butterfly seasonal patterns in high latitudes will reflect their climatic niches, and hence the evolutionary history of participating species.