Conversion of tropical forests to oil palm plantation decreases the bioturbator diversity, but not the total amounts of translocated soil. 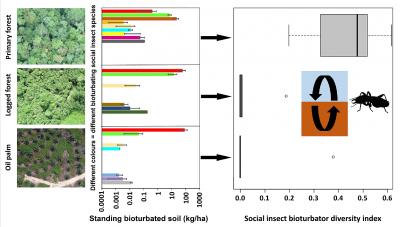 The article in Applied Soil Ecology shows that although diversity of bioturbating organisms varies greatly among differently degraded tropical forests, the amount of soil brought by them to surface (bioturbation) is relatively stable. The study also presents a protocol for measuring this ecosystem process.

Anthropogenic habitat change is rapid in the tropics. Logging of rainforests and conversion to agricultural habitats is widespread with serious effects for species composition and ecosystem processes. One important ecosystem process is animal-driven bioturbation: the turnover of soil material by soil-dwelling organisms. In this study, we developed a protocol for measuring aboveground bioturbation, and assessed how bioturbation rates and standing amounts of aboveground bioturbated soil change as primary tropical rainforests are logged and converted to oil palm plantation in Borneo. Across all habitats, most standing bioturbated soil was generated by termites (97.0%), while short-term, small-scale bioturbation was mainly generated by earthworms (87.3%). The species diversity of social insects (ants and termites) involved in bioturbation was higher in primary forest than in either logged forest or oil palm plantation. However, neither standing bioturbated soil, nor short-term bioturbation rate differed among habitats. Unexpectedly, in primary forest, high levels of bioturbation were associated with low bioturbator diversity. This was because two termite species, where present, conducted nearly all bioturbation by building their large nests. Our results emphasize the importance, across all habitats, of termites for generating standing aboveground soil structures, and earthworms for short-term soil turnover. In oil palm plantation, bioturbation relies on a smaller number of species, raising concerns about future environmental change and consequent species loss for sustainability of this system.