Biparental care recorded for the first time in bees 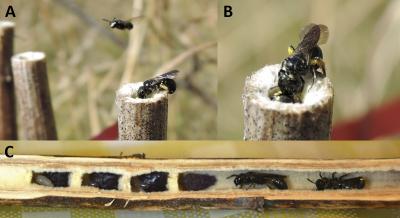 The article in PNAS provides the first evidence of biparental care for offspring in bees.

Photo description: A. The female arrives at the nest entrance with a pollen load. She uses her fore legs to scratch the metasoma of the male to let her pass. Another male flies around, probably searching for a nest without a guard male. B. Detailed image of the female scratching on the male’s metasoma. C. Dissected active brood nest with three completed brood cells and one cell currently being provisioned. In C, a female (left) and male (right) are present in the burrow.

While in vertebrates (including humans), biparental care is quite common, in Hymenoptera, eusociality with more females caring together for offspring is much more widespread. In the case of bees which belongs to Hymenoptera, biparental care was not known before. In the present study examined by a team from Charles University and Institute of Entomology leaded by Mgr. Michael Mikát, the biparental care was documented for the first time in solitary bee Ceratina nigrolabiata.

In C. nigrolabiata, male and female occurred together in 88% of active brood nests. While female is provisioning the nest (by pollen and nectar), male is guarding in the nest entrance in order to prevent predators and parasitoids from entering the nest. When the male is experimentally removed from the nest, the female is afraid to leave the nest for a longer time so the number of fed brood cells decreases. However, the male doesn't stay in the nest for the whole season, males are alternating in the nest, usually faster than once a week. The more often males are alternating, the less brood cells are supplied by female.

During the season, female is usually mating with more males. Thus, the guarding male doesn't have to be the father of brood in guarded nest. However, with increasing duration of male's guarding, also the chance of being father is increasing. The authors suppose that the biparental care in Ceratina has evolved due to such polyandry. In Hymenoptera, females are often mating only with single male and subsequently, males are dying soon. Thus, males can't help with care for offspring. In the case of C. nigrolabiata and several closely related species of the genus Ceratina, males are long-living and females mate repeatedly, which then allowed the origin of biparental care.