The puzzle of global butterfly distribution partially deciphered: phylogeny and biogeography of Leptotina 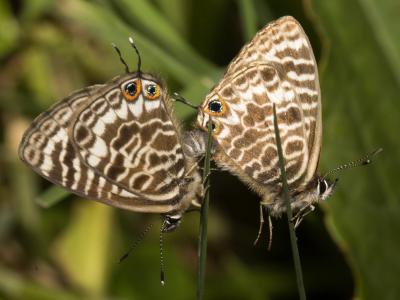 The article in Systematic Entomology provides the results of the first phylogenetic and biogeographic study of otherwise neglected butterflies of the subtribe Leptotina (Lepidoptera, Lycaenidae), widely distributed in all tropical and subtropical areas in the world.

Photo description: Mating pair of Leptotes jeanneli from Ethiopia. This species is a member of the genus’ African section. The butterflies were photographed by late Rob Dickinson, who made many excellent photographs of African butterflies. Published with agreement of Robyn Dickinson.

We analysed the most comprehensively sampled molecular dataset for this group using both likelihood and Bayesian approaches with estimated time of diversification. We used four genes for 13 species of the genus Leptotes Scudder and one species of the genus Cyclyrius Butler. Both genera together form a monophyletic clade, Cyclyrius is rooted deep inside Leptotes. Besides taxonomic revisions (one new species, one species elevated from a subspecies and synonymisation of Cyclyrius), we show that the genus Leptotes originated between the late Eocene and early Oligocene (35–31 Ma). During the Miocene it dispersed to the rest of the southern hemisphere, with further speciation events within the Indo-Australian region, and separate radiations in the Americas and the Afrotropics. Leptotes webbianus from the Canary Islands turned out to be sister to the American clade from which it split c. 12 Ma. The most widespread species, Leptotes pirithous originated in Madagascar c. 4 Ma and invaded the whole of Africa and southern Europe, including numerous surrounding islands. Thus, Madagascar is a significant source for continental biodiversity.