An uphill struggle: the break-down of an ant-plant protection mutualism with elevation 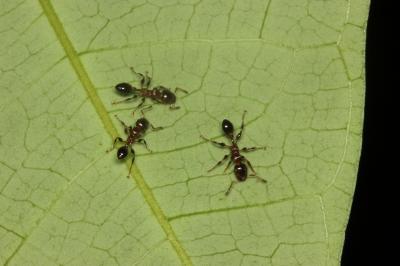 In the tropics, many plant species benefit from hosting ant “partners” which protect them from herbivores in return for food and shelter.

In the tropics, many plant species benefit from hosting ant “partners” which protect them from herbivores in return for food and shelter. However, not much is known about how environmental context can affect the balance of costs and benefits for species in this mutualistic relationship. In more stressful environments, do plants provide enough resources for their ant partners, and do ants provide enough protection to their plant hosts? If the balance shifts, then the mutualism could break down.

A team of researchers from the University of South Bohemia and the Biology Centre of the Czech Academy of Sciences explored this question on the forested slopes of Mount Wilhelm in Papua New Guinea. They surveyed small trees in the understory for evidence of ant inhabitation, recording levels of herbivory to discover how well ants protect their host trees along an elevational gradient. They also observed ant behaviour to compare how actively they protected plants at different elevations.

They found that at higher elevations ant-plants were far less abundant than in lowlands where ants-plants were more abundant and species rich. Furthermore they discovered that plants suffered more herbivory damage with increasing elevation, and ants were less abundant and active on their host plants. These findings suggest that this symbiosis breaks down with elevation, where temperatures are cooler and ants are less effective plant protectors.